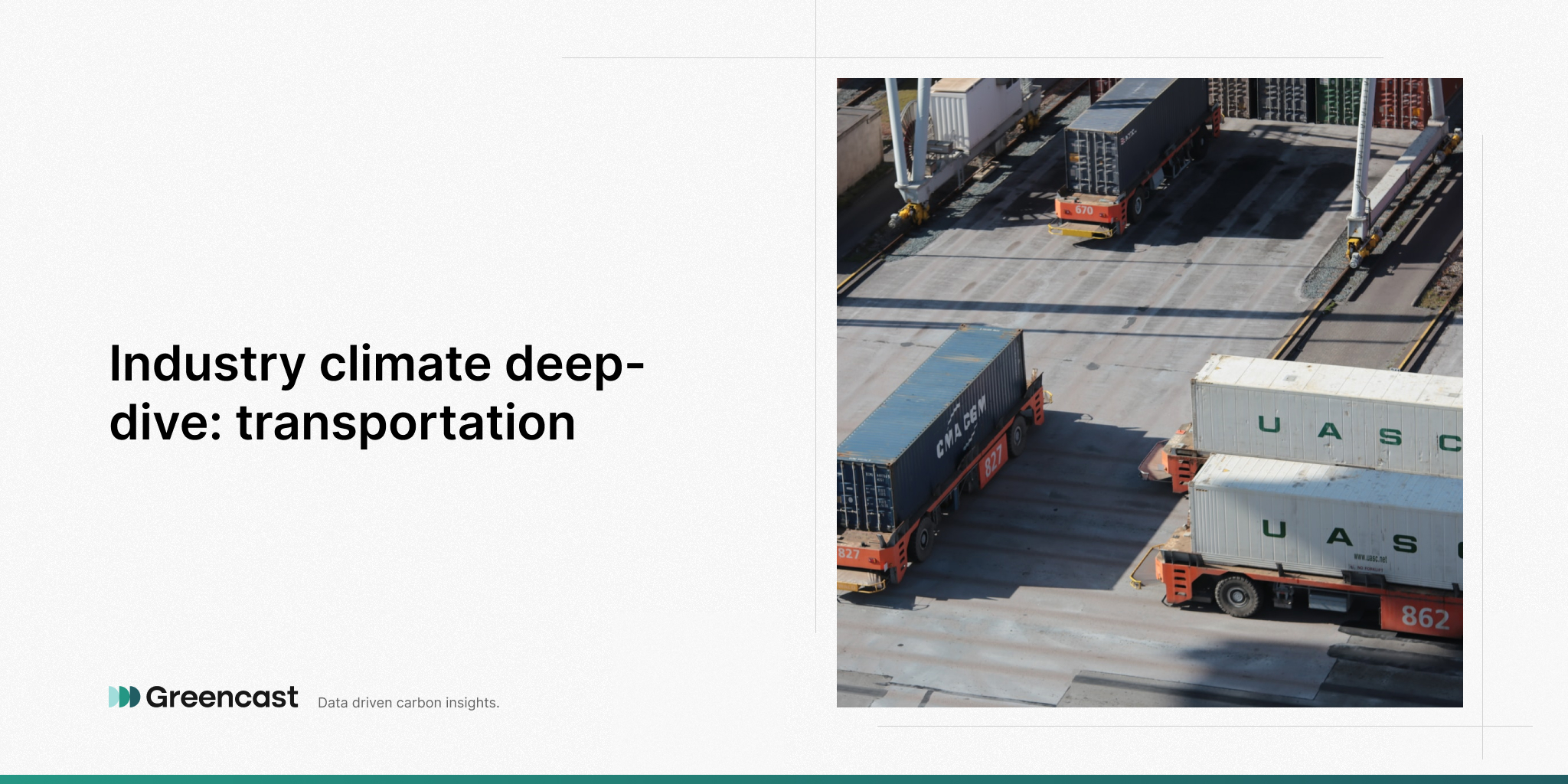 In this blog, another industry is examined: The transport industry.

It is not a secret that the transportation sector is responsible for a large share of the greenhouse gas emissions and negatively contributes to air pollution in cities. In order to tackle this problem, this sector has become a hot topic in climate discussions and political debates. The question then arises as to how this industry has evolved and grown into one of the most polluting industries worldwide.

Therefore, we are taking a look at how it all started. Initially, the industrial revolution paved the way for the environmental predicament we find ourselves in today. In today's world, the industries we know pose a stark contrast to their pre-industrial counterparts. With the invention of machinery which is predominantly driven on fossil fuels such as oil and coal, manual labor has rapidly been replaced. As mentioned by National Geographic, these novel technologies have brought about exciting new modes of transport. However, these very same technologies are almost entirely responsible for the widespread pollution of the planet.

In a study conducted by the Federal Transit Administration in the U.S., it was discovered that in 2017 the transportation sector generated the largest percentage of greenhouse gases emitted in the United States - a figure nearly touching 30%. Globally, transportation accounted for 29% of the total emitted emissions last year. Within this transport sector, motor vehicles have the largest share in emitted emissions. However, other modes of transport such as airplanes or cruise ships, are relatively more polluting as they create greater emissions per person kilometer.

All sources of transport affect the air quality and bad air quality can cause damage to human health. According to the WHO, nine out of ten people currently breathe polluted air on a yearly basis, and 7 million people die prematurely as a result of air pollution. Diseases occurring as a result of polluted air include lung cancer and heart diseases among other serious health problems. This is not surprising when considering that the pollutants that are being emitted from transportation include lead (Pb), carbon monoxide (CO), nitrogen oxides (NOx), silicon tetrafluoride (SF6), benzene (C6H6), volatile components (VOCs) heavy metals (zinc, chrome, copper, and cadmium) and particulate matters (PM).

In addition, the air pollution caused by transportation contributes to smog as well. The common smog that floats above almost every urban civilization is mostly the result of a chemical reaction between sunlight, nitrogen oxide, and at least one Volatile Organic Compound (VOC). The nitrogen oxides come mainly from car exhaust and the VOCs are the result of the use of gasoline among others. Smog is a danger to humans, animals, and plants since it causes problems and diseases to the lungs and hampers oxygen uptake.

In 2021, 29% of the greenhouse gas emissions were generated by the transport sector. The emissions primarily originate from burning fossil fuels for the use of cars, trucks, ships, trains, and planes. As the world evolves, people tend to move further and more often. This leads to an increased demand for transportation. To accommodate this fast-growing demand, the transport sector will continuously expand leading to higher traffic volumes and thus more emissions.  The International Energy Agency expects car ownership rates to increase by 60%. Similarly, cargo transport is expected to continue to rise.

Within Europe, passenger vehicles are responsible for more than 10 percent of total emitted emissions. Secondly, road freight makes up a large part of CO2 emissions and their emissions are growing fast. Trucks have played a major role in the impact of climate change. Following up, the aviation industry is a significant contributor to total global emissions. A large amount of kerosene that is needed for aviation makes aviation the most carbon-intensive form of travel. Not only do airplanes release CO2, they also emit other gases and pollutants, which account for 66% of the global warming caused by airplanes. This results in a decrease in Ozone (O3), a decrease in methane (CH4), and emissions of water vapor among others. Fourthly, shipping is responsible for 3% of global CO2 emissions and is expected to grow. Besides CO2, shipping also emits Black Carbon, a material that contributes to global warming through the absorption of sunlight, speeding up the melting of the ice caps. To reach the Net Zero goals by 2050, the transport sector emissions should fall by 20% by 2030.

Other forms of pollution

Vehicles are also a source of water pollution. There is a high probability of disaster such as leaking tanks, oil drips, roadside herbicides, loss of wetlands and so on. Vehicles often leak oil and gas. Especially shipping has historically been a source of chemical spills. As a result of the rising demand for maritime shipping, the negative impact on the environment has increased. As a result, various consequences include contaminated drinking water and wildlife habitat damage.

Although unrelated to climate change,  another form of pollution that is getting more attention nowadays is noise pollution, which is recognized to be a serious public health issue by the WHO. Besides the fact that it is considered to be bothersome by many, it also causes stress, hearing problems, and distribution of sleep patterns, which contributes to cardiovascular diseases.

As previously mentioned, the transport sector is a large contributing factor to environmental issues such as air quality, water quality, emissions, and noise pollution. It has become evident that our planet will not survive these old habits. Yet, the damages incurred are mostly reversible if proper action is taken.

Shanghai’s Hongqiao transport hub is a great example of an innovative transport system, combining air, rail, and bus travel. This area encourages travelers to switch from private transport to public transport, walking or cycling. In a nutshell, this area’s bus and rail efficiency, pricing, and frequency completely outperforms that of a private vehicle. For this reason, carpooling in the form of bus or metro transport is encouraged. When measuring the carbon footprint of this airport, it has significantly decreased by imposing this new strategy.

Another example is Norway’s early adoption of electric vehicles, proving them to be a world leader in terms of sustainable transport. In 2017, a third of all cars sold in Norway were electric. Besides that, it is remarkable to see the growth in the global electric car industry. In 2012, as many as 130,000 electric cars were sold globally. By today, this amount is sold in the span of a single week. This shows promising prospects for the future.

Although sustainability is becoming an increasingly important topic of interest for governments, businesses, and individuals, a completely sustainable future is still out of reach. As the world faces challenges never been dealt with before, the world must come into action with creative solutions to overcome the challenges at hand. It, therefore, remains important for both individuals and companies to analyze their carbon footprints and define clear action plans on how to efficiently and effectively reduce them.